A few weeks ago I got a text saying that a local cartoonist was doing a punk rock comic that he was giving away. I sent a note to the email, and entered into an amusing exchange with Reid Muoio, arguing over who was going to do the work in typing answers to my standard interview questions. As you can see, we both won. Or lost. Without further explanation, here's his answers.

Through friends I found a graphic designer and self-published “a d.c. punk” during the pandemic.   Going through the boxes now with a view towards getting out another one or two.  Think the next will be called “stag.”

I have been writing and drawing comics my whole life.  Throwing them in a box. Simple remembrances.

My parents moved their young family to DC in the wake of the race riots because housing was cheap.  I live in that house now. Pretty close to Comet Pizza. Neighbors are old as balls. One hobbled over the other day and waved his cane at me while I jammed outside with a friend. He’s a nice guy. We were drunk. 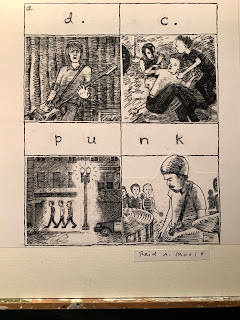 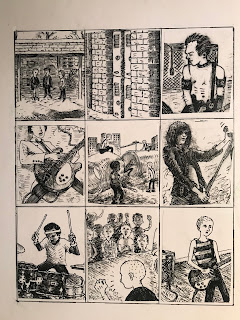 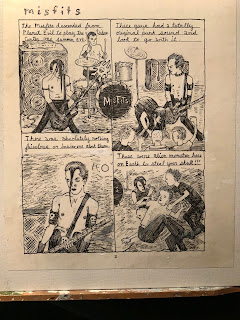 The DC Conspiracy is a group of part-time local cartoonists, one of whom, Evan Keeling, does comics about the punk scene.

I am heartened to know there is a D.C. comic community. Maybe I’ll get to know some of you. Does anyone sing? Band could use a singer. And its not punk.  Just about everything else.

Do you have a website or blog?
Don’t have a website. Don’t understand the commerce of comix. Does not appear to be any money in it. Draw what you love.
How does one get a copy of "a d.c. punk" then?
Right now I’m giving “a d.c. punk” away to anyone who emails me at muoiocomix@gmail.com.
Posted by Mike Rhode at 9:22 AM