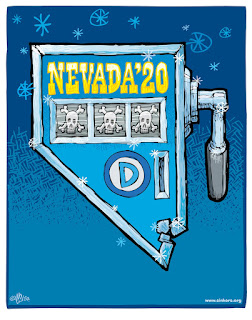 What happens in Vegas isn't staying in Vegas THIS time, folks. The word is out about The Skanky App Developed By The Skanky App  Developers Partially Funded By The Buttigieg Campaign. This time, it's another off-the-shelf Google product — an allegedly "secure Google web  form" running on a batch of iPads purchased by the DNC, or "dPads", as it were.

An associate professor of CompSci at the University of Iowa promptly went into "OK Boomer" mode, blaming the age of the poll workers (70)  instead of perhaps considering their over-engineered with built-in security vulns cheesy-ass Google "app" which is basically a hammer in  search of a nail, and a disaster waiting to happen so obvious that it's got a goddamn lampshade hanging on it.

Gotta love this closing paragraph, though, with the money quote from some flack at the Alliance For Securing Democracy (spit) — basically, "if you're cynical about the state of American 'democracy' and refuse to participate in elections, then the terrorists win":

"Regardless of the challenges that may exist in administering the election, I think it's incumbent on any Nevadan who wants to participate in the caucus to do so," Levine said. "If you are not participating for that reason, that's a win for our adversaries, both domestic and foreign."

"Tech for Nevada Caucuses Under Scrutiny after Iowa debacle", The Hill  02.17.20
https://thehill.com/policy/cybersecurity/483202-tech-for-nevada-caucuses-under-scrutiny-after-iowa-debacle