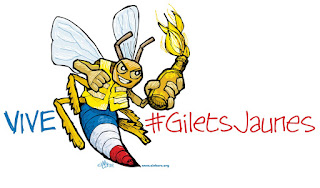 In solidarity with the French revolutionaries of the Gilets Jaunes.

Much of the US Left points to the Gilets Jaunes as proof that protest works, but they couldn't be more wrong. Protest doesn't work; insurrection does.

The Gilets Jaunes didn't put Macron on the run and achieve a rollback of the regressive "carbon tax" by putting on a big police-permitted march on a Saturday afternoon and returning to work on Monday; they did it by totally disrupting business as usual, by tearing up the streets and burning the m*th@rf%ck!r down, by making the posh shopping districts unshoppable, and making the country ungovernable week after week.