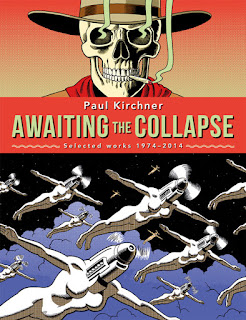 Awaiting the Collapse: Selected Works 1974-2014 by Paul Kirchner is one of the best archival reprint projects of 2017. Unfortunately, due to it's content, both sexual and drug-related, it will not find the large American audience that Kirchner deserves.

Let's look first at the publisher's description of the book.

After the bus and the bus 2, this third collaboration between French publishing house Tanibis and comic book artist Paul Kirchner is a collection of the artist’s works, most of them initially published in counter-culture magazines in the 1970s and the 1980s and some dating from his return to comics in the 2010s. 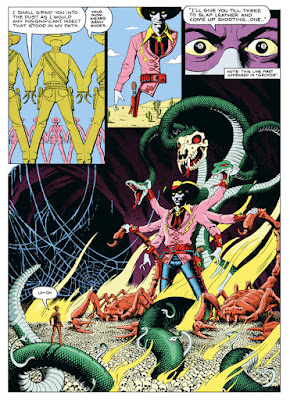 Roughly a third of the stories star Dope Rider, the pot-smoking skeleton whose psychedelic adventures take him through colorful vistas equally reminiscent of Sergio Leone’s spaghetti western films and of the surrealistic paintings of René Magritte and Salvador Dalí. These stories were originally drawn for the marijuana-themed magazine High Times but were also for Kirchner an excuse to create his very own brand of visual poetry.

An other third of the book is a miscellaneous collection of comics whose stories range from the loony (the sextraterrestrial invasion of Earth in “They Came from Uranus”) to the satirical (“Critical mass of cool”) and the outright subversive (if you ever wondered what games toys play at night, read “Dolls at Midnight”).

This book also features a broad selection of the covers Kirchner made for the pornographic tabloid Screw in the 1970s.

Awaiting the Collapse finally contains a previously unpublished essay by Paul Kirchner about his career and his influences, which helps put in perspective the works published in this book.

The description which is admirably clear about the nature of Kirchner's work explains why you won't see this on anyone's best of the year list besides mine. The first reprints Dope Rider stories from the 1970s which focus on a walking skeleton attempting to acquire the best marijuana (and initially heroin). The stories are wildly surrealistic and make little sense, although Kirchner apparently did not participate in the drug culture. He also did sexualized covers for the notorious Screw newspaper, but again says in the excellent afterword that he also wasn't interested in the hedonistic adult industry world. "I too might seem an unlikely fit for Screw, having no interest in hard-core pornography... Although I drew cartoons involving leather fetishism and bondage, to me those were just subject matter, offering visual possibilities. They struck me as more humorous than erotic. So how did a sober, strait-laced fellow like me find himself drawing Screw covers and Dope Rider? I have a naughty streak that demands express, and I indulge it in my art." (p. 140)

Also Kirchner, like most of his mentors, followed the money. Kirchner says he grew up admiring Jack Kirby and Steve Ditko, two of the more surreal mainstream comics artists, and then as part of a group of young Turks in New York City in the early 1970s hung around Neal Adams's Continuity Associates and worked for Wally Wood. Wood's influences are clear in the work reprinted here (apparently selected by Kirchner, and occasionally reconstructed). Kirchner also sought Steranko's advice, and one can easily see some pages influenced by that most theatrical of comic book artists. (See the panel of the Dope Rider drawing a gun on page 22 for example). The reprint quality of the artwork is stunning also, with much of it being reconstructed by his editor or recolored by Kirchner.

While I greatly admire Kirchner's craft, the best part of the book is the autobiographical essay at the end. Kirchner recounts his working career, including working in an early comic book store, ghosting Little Orphan Annie, drawing the graphic novel Murder by Remote Control for the Dutch mystery writer Janwillem van de Wetering, working for the New York Times, and collecting and firing guns with Wally Wood and the African-American cartoonist Wayne Howard. Kirchner admits to being a slow artist, and eventually had to go to work in advertising to support his family, but recently he's returned to comics although he's now in his 60s. The book includes some of his newer material as does the bus 2, and although Kirchner says his skills were rusty, his recent work compares well to his earlier art. He's doing a new comic strip, and closes his essay on a high note, writing, "When you do commercial work, as I  did for 30 years, it pays well but means nothing.  ... Instead of anxiously waiting for the next assignment, I am how happily working on the next idea. To do creative work is good for the soul. As long as you have an enthusiasm, you have happiness." (p. 151)

While this book obviously isn't for everyone, serious comics readers, especially those interested in the underground, should acquire and read it
.

Tanabis kindly provided me with a review copy of the physical book.
Posted by Mike Rhode at 10:47 PM