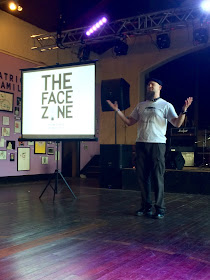 A couple of years ago I had the good fortune of finding out about local visual and performance artist, wordsmith, musician and teacher, Martin Graff and his extraordinary ongoing project known as The Face Zone. It was at a cartoonists and comics art exhibit in downtown Frederick, Maryland that I noticed a wall full of curious little minimalistic illustrations of strange and interesting faces, accompanied by some words. The cartoonish faces depicted things like melting cheese on a pizza and titles like "Melting Cheese Pain", paired with thoughtful musings on the dark side of personification. The words and images were brilliant and unique observations on everyday life, in some ways like a punk rock Jerry Seinfeld, with a Banksy-like sensibility.
Soon after, Marty, as most folks know him, had a big exhibit of his work, again in downtown Frederick, and I ended up purchasing his self-published Face Zone book, which compiled most of his words and illustrations. Marty describes his Face Zone series as "short visual meditations on what makes the world go round. Existential musings with a surreal twist and a dark sense of humor sure to trip your imagination...". 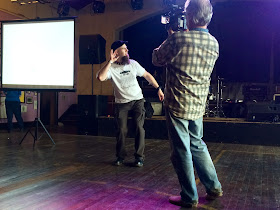 Last night, Artomatic, Frederick hosted one of Marty's live Face Zone events, taking those short, visual meditations one step further into the realm of spoken-word and performance art. As someone who has struggled, personally with speaking in front of one's peers, it always amazes me when someone seems to effortlessly get up in front of an audience of people to talk, act, sing or dance. I'm even more amazed when someone can remember their lines or the words they want to express to an audience, without forgetting. While Marty's performance, based on his illustrated and written Face Zone material, seemed like second-nature for him, there's no doubt the amount of time, energy and preparation condensed into a single half-an-hour show, was anything but effortless. 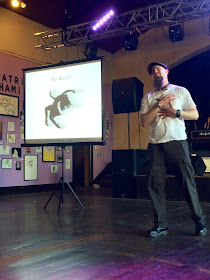 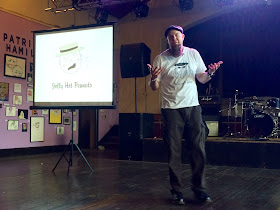 Seeing and hearing Marty expand and further elaborate upon the words and images in his book added yet another crucial dimension to The Face Zone experience, and according to Marty, is ultimately the core of what he does now - the book more or less a companion to his spoken-word shows. As someone who experienced both the art exhibits and book aspect of The Face Zone first, I found the spoken-word performance to delve much deeper and further into these musings on subject matter ranging from the relativity of the food we eat ("The Smell of Fresh Mangoons") to haunting childhood memories of how choking on a single lemon drop soured a young boy's perception of the ocean, off the Jersey shore ("Twinkles in The Sea").  One of my personal favorites was Marty's take on the absurdity of commercial advertising, with its irrational fairy-tale promises and the less-than-satisfying results ("Jolly Hot Peanuts"), which he began last night's performance with. However, despite the dark humor and keenly cynical observations of The Face Zone live, there was a glowingly optimistic underlying message of hope, and the love of life at the very core of it all. 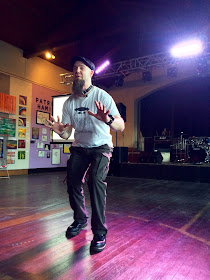 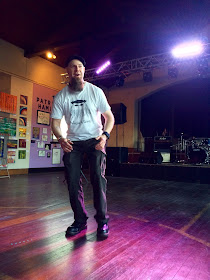 The ability to hold an audience captive for extended periods of time as a one-man spoken word act is by no means an easy task, and in some ways Marty's musings and highly engaging observations on the world in which we live, relayed through the medium of speech, and told through the lens of personal experience, reminded me of some of the best performances from Henry Rollins, who I've seen speak live on several occasions over the past two decades. Word has it there may even be a musical element added to The Face Zone live experience in the not-too-distant future. Whatever the case, don't hesitate to witness Marty's live act, if he comes to a venue near you. In the meantime, TED Talks should seriously consider inviting Marty to do his thing for them, someday soon!
steve at 8:53 PM
Share