Brad Meltzer in town this week

The comic book writer is signing his new book, Heroes for My Son. I'll be going to the Bailey's Crossroad's one.

Although Brad's gone onto hotter climes, we've got a fond spot in our hearts for him, even after the rotten things he did to Sue Dibney. See "Meltzer Talks "Book of Lies" & "Buffy"," by Jeffrey Renaud, Staff Writer, Wed, June 3rd, 2009.
Posted by Mike Rhode at 9:56 PM No comments:

Christopher Porter of the Express wrote in to note that he did a short interview with Brad Meltzer that was in Thursday's Express, and he noted "I did a longer piece on Brad six years ago in the City Paper; the setting was Big Planet."

Meltzer will be at the Book Festival on the Mall tomorrow.

Sara Duke, who will also be at the Book Festival tomorrow as a Library of Congress escort, wrote in to note that the Library has a podcast with Brad online now.
Posted by Mike Rhode at 5:23 PM No comments:

For more than 20 years, Neil Gaiman has been a top writer of modern comics and a best-selling novelist. His work has appeared in translation in more than 19 countries, and nearly all of his novels, graphic and otherwise, have been optioned for films. He was the creator-writer of the monthly cult DC Comics series Sandman, which won many awards, including a World Fantasy Award. He is the author of the critically acclaimed American Gods, awarded the Hugo, Nebula, Bram Stoker, SFX and Locus awards, and his novel Stardust was a winner of the American Library Association’s Alex Award as one of 2000’s top 10 adult novels for young adults. His children’s books include the international best-selling novel Coraline (2002), a winner of the Bram Stoker Award and the Hugo Award. His latest novel for young readers is The Graveyard Book (HarperCollins, September 2008). He lives near Minneapolis.

Brad Meltzer earned credit from Columbia Law School for writing his first book, The Tenth Justice (1997), the first in a line of New York Times best-sellers. His books have a total of almost 3 million copies in print and have been translated into more than a dozen languages. His latest thriller is The Book of Lies (Grand Central, September 2008). He is also the author of the critically acclaimed comic book Identity Crisis and the first author to ever reach the No. 1 spot on both the New York Times and the Diamond comic book best-seller lists simultaneously. He lives in Miami.

Georgia Higley & Sara Duke will be manning a Library of Congress table at SPX. This is your chance to donate a copy of your comic book to the Library! (If you see me, you can give me one to give to Michigan State University's Comic Art Collection too).
Posted by Mike Rhode at 6:20 PM No comments:

Here's some info from the Library of Congress. These events are always mob scenes.
Posted by Mike Rhode at 5:28 PM No comments:

Meltzer at Politics and Prose

Here's a couple of pictures from the booksigning for The Book of Lies at Politics and Prose. Chris and Randy were there and perhaps can chime in with details.

Brad talked about his love for Superman, read parts of the 2nd and 3rd chapter, talked about his project to save Jerry Siegel's house, mentioned his marketing campaign for the book, and gave a shot out to California Tortilla (a founder can be seen in the back of one of the pictures). A recording of the talk can be bought from P&P. 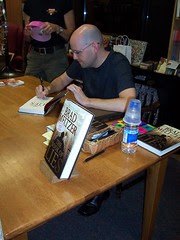 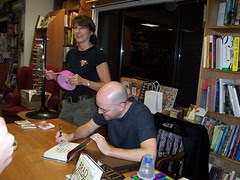 Posted by Mike Rhode at 7:56 PM No comments:

His wife sends out the PR! I love that! Here's the email, which since it was labelled "Brad’s new book -- pass it on..." I am posting here. Again, I'm going to the Thursday night signing at Politics and Prose.

Here it is -- Brad's new thriller, The Book of Lies, is published today, and as you'll see below, he's been waiting his whole life to write this one (which is why it's my true favorite). It's filled with his usual obsessive research, but this is the one that will make your Mom (and Dad) cry. So what's it about?

In Chapter 4 of the Bible, Cain kills Abel. But the Bible is silent about the weapon Cain used to kill his brother. That weapon is still lost to history.

In 1932, Mitchell Siegel was killed by three gunshots to his chest.While mourning, his son created the world's greatest hero: Superman. And like Cain's murder weapon, the gun used in this unsolved murder has never been found. Until now.

What do these two murders, committed thousands of years apart, have in common? The
answer is in The Book of Lies.

To buy the book, you can click here:
http://www.bradmeltzer.com/novels/book-of-lies/buy.php

To hear the soundtrack (oh, yes -- a real soundtrack from Victor Records, plus REM and the new Book of Lies song) is here:
http://www.bradmeltzer.com/soundtracks.php

And finally, to see the most important thing we've done with any of the books -- and what we're doing to save the house where Superman was created, click here: http://www.youtube.com/watch?v=25R2kcJxQuc

And of course he's on facebook, myspace, and all that other stuff I refuse to acknowledge exists.

Let me just say one last thing: I hope you know how much your love and support of Brad and the rest of us has meant over the past few months. In many ways, I was afraid that him seeing everyone on tour would turn into something sad, but it's clear it's truly a celebration. So please do go find Brad on one of the tour stops and give him a hug for me.

(that last is definitely from Brad's wife, not me.)
Posted by Mike Rhode at 6:01 PM No comments:

Another Meltzer bit or two

And here's a blog post: "Brad Meltzer: Faster than a speeding bullet," by Chauncey Mabe, South Florida Sun Sentinel's Off the Page blog August 31, 2008.
Posted by Mike Rhode at 8:22 PM No comments:

Give me that ol' time Bat-religion, and other news 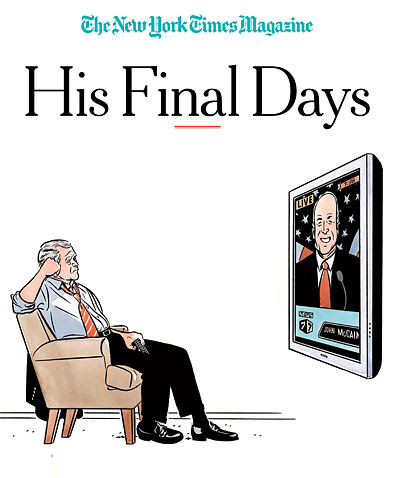 "Must-See Sermons: Va. Pastor Culls Lessons From Silver Screen to Pull In Larger Audience," By Ben Hubbard, Washington Post Staff Writer, Sunday, August 31, 2008; C01 is about a minister who's preached dressed as both the Batman and the Joker during sermons.

Also, the last completely new For Better or For Worse strip appeared in the Sunday Post comics section. Ms. Johnston extrapolates what happens to the characters in the future, much as the last Harry Potter book did.

In the "Lord, what fools these mortals be" column we find "Studio War Involving ‘Watchmen’ Heats Up," By MICHAEL CIEPLY, New York Times August 30, 2008. 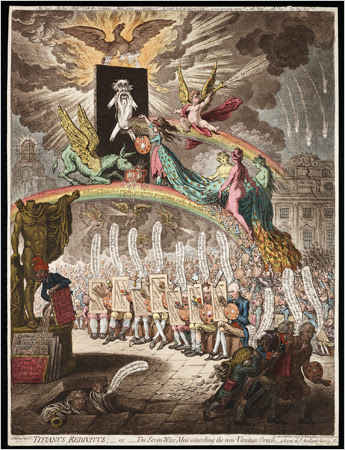 This piece explained a James Gillray cartoon, which can be incomprehensible at a remove of 200 years - "Be an Old Master, for 10 Guineas," By J. D. BIERSDORFER, New York Times August 31, 2008

In the Sunday Examiner's inserts - "Why I love Superman: A best-selling novelist on why he adores the Man of Steel," By Brad Meltzer, USA Weekend August 29 2008.
Posted by Mike Rhode at 12:26 PM No comments:

Brad's publisher is really pushing this book. Here's the postcard that came in the mail yesterday. 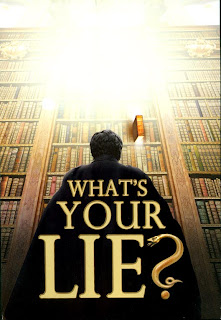 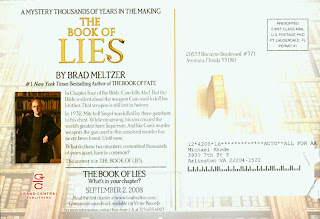 Brad's comic book Last Will and Testament came out from DC Comics this week and I picked it up, but haven't read it yet. It seems to deal with Geo-Force from the Outsiders and whatever the Final Crisis is.
Posted by Mike Rhode at 5:47 PM No comments:

Today, The Cleveland Plain Dealer smacks it around a bit in response - "Novel's Superman lore a bit weak on the facts," by Patrick O'Donnell and Michael Sangiacomo, Wednesday August 27, 2008.
Posted by Mike Rhode at 8:41 PM No comments:

Formal invitation to The Book of Lies by Brad Meltzer 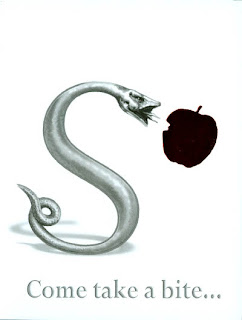 Here's a scan of an invitation that arrived in the mail. As I've said, I'm going to the Politics and Prose one. 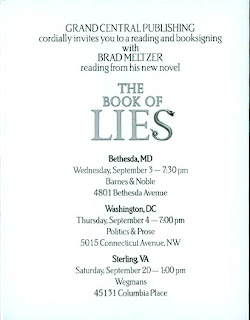 Posted by Mike Rhode at 5:55 PM No comments:

Geoff Boucher has a nice little piece on ex-local guy Brad Meltzer and his new book at "Brad Meltzer and the 'The Book of Lies'." Brad will be in town signing this and his new DC Comic, which comes out this week, in September. Click on his name in the labels for information on the signings.
Posted by Mike Rhode at 11:59 AM No comments: 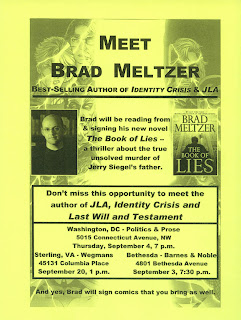 Here's the ad that was handed out at Big Planet Comics (where Brad used to shop) this week. I'm planning on going to the Politics and Prose one.
Posted by Mike Rhode at 7:22 PM No comments: