Local comic booker and co-DC Conspiracy founder Evan Keeling is putting the final touches on his new comic DC Punk Presents: Nation of Ulysses: Part 1: ’88-’90. Over the past few years, Keeling has reached out to various members of the defunct D.C. punk band to pull together this book. Below, Keeling answers a few questions about this book—which is premiering at the Small Press Expo in Bethesda, Md., Sept. 19-20—as well as his previous book in the series on the band DC Punk Presents: The Warmers: Part 1.

What inspired you to do this series on D.C. punk bands? 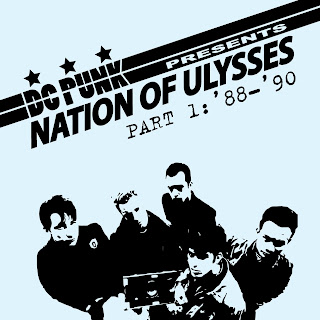 I grew up in D.C. and got really into punk music and the music coming out of D.C. in high school. D.C. has a long history with punk and a very influential one, but what mostly gets documented is the '80s. While that was an extremely fertile time and hard a larger impact on punk at a national level, most of the histories I’ve read or seen stop right before they really get into the bands that meant a lot to me growing up. Also for some of these bands, I wasn’t finding a lot of information available on the them so I could either wait around till someone else maybe wrote something or I could go find it myself.

Through my research, I did find Brandon Gentry who wrote the great eBook Capitol Contingency that is covering some of the same ground. He has been a great help getting me e-mails. But while his book focuses on individual albums, I wanted to dive a little further into how the members of the bands lived outside of their musical accomplishments. I also found some great resources’ for information like the D.C. Library Punk Archive and the UMD D.C. Zane archive, which is curated by John Davis (Q and not U, Title Tracks). That I will be utilizing and contributing to as I continue the project.

What connections did you have with the bands members in both books? Was it difficult in finding them after so many years?

Previous to this project, I didn’t know any members of these bands personally. I had talked to Alec [MacKaye] a couple of times back during the time the Warmers were active, but not much more than that. But I did know a number of folks that were in other bands that I am going to cover in the series and I started with them and it spread out from there.

Basically, I just started going through some of my friends Facebook friends, and when I recognized a name I would blind e-mail them and ask if they would let me interview them. Then, as people agreed, I would ask them to pass the word along or get me in touch with other members of their bands and get more e-mails and send out queries.

Luckily, a lot of folks are really happy to talk about the bands that they were in and have been very forthcoming with information. One of the first people to get back to me was Tim Green from Nation of Ulysses, and he was really forthcoming and a fountain of information, and Alec has had me over to his house a couple of times and shown me a lot of great pictures from his personal stuff. So far I would say for the most part the people I’ve interviewed have been super helpful.

I especially liked the endnotes at the end of Nation of Ulysses; they give deeper context to the events in the book without breaking the natural flow of the story. How did that idea come about? 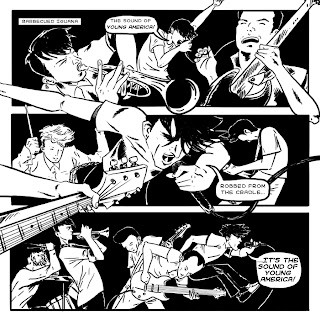 It’s been over 20 years since most of these bands were together so sometimes memories are short and have to fabricate events for the flow of the story. I wanted to make these comics a narrative not just a string of facts and I remembered in [the graphic novel] From Hell how Alan Moore had extensive end notes that told page by page what he made up what lines were taken from different writings and such. I thought that would be a great way to get the information out and still have a narrative. There are also a lot of people and places that are going to appear in the stories. I didn’t want to crowd the pages with informative text boxes or have awkward introductions like “Hello, Christina Billotte from Slant 6” or “Let’s go to independent music venue d.c. space.” Nobody talks like that and I want the conversations to be as natural as possible. This isn’t like Harry Potter or some such thing where everyone and everything is getting introduced, these people have known each other for years.

Local label Dischord Records now carries The Warmers. Can you tell us how that came about? 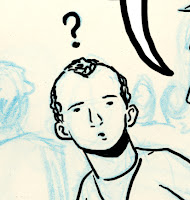 When I was tabling this year at the DC Zine Fest, Ian MacKaye [Dischord Records founder] came by my table. I had talked to him before briefly about the project. His partner Amy Farina was the drummer in the Warmers and I had sent her a copy of the book. So he knew about the comic and wanted to pick some up for some other folks. I had a bunch of misprints that I had cut out to make buttons of peoples faces from the book and Ian had his and Amy’s son with him so they were having fun digging through the buttons and grabbing ones of people they recognized. While this was going on Ian asked me if Dischord Direct was distributing it. I told him that I was having trouble getting in touch with them. So Ian emailed me and got me in direct touch with Brian who runs Dischord Direct. It’s pretty exciting to be distributed there because if someone were to go to the Dischord site and look up the Warmers, my comic is listed right there along with their albums.

What bands are you eyeing for to cover in future issues?

[Local cartoonist/artist] Eric Gordon of Vinyl Vagabonds is going to draw at least one issue about Circus Lupus for me once I get him some more info. With a little more legwork I’m hoping to put together a comic about Corm-Tech. Then I have a number of other bands like Monorchid, Bratmobile, The Meta-Matics and the All-Scars where I have some information but need to conduct some more interviews to develop a narrative. I’d really like to do one on Slant 6 and Frodus, but I have to get in touch with some folks to get those going.

There are so many bands that it is going to take a while. I started with Eric but I am still scouting around for collaborators so I can get more issues out faster.
Posted by Matt Dembicki at 9:04 AM